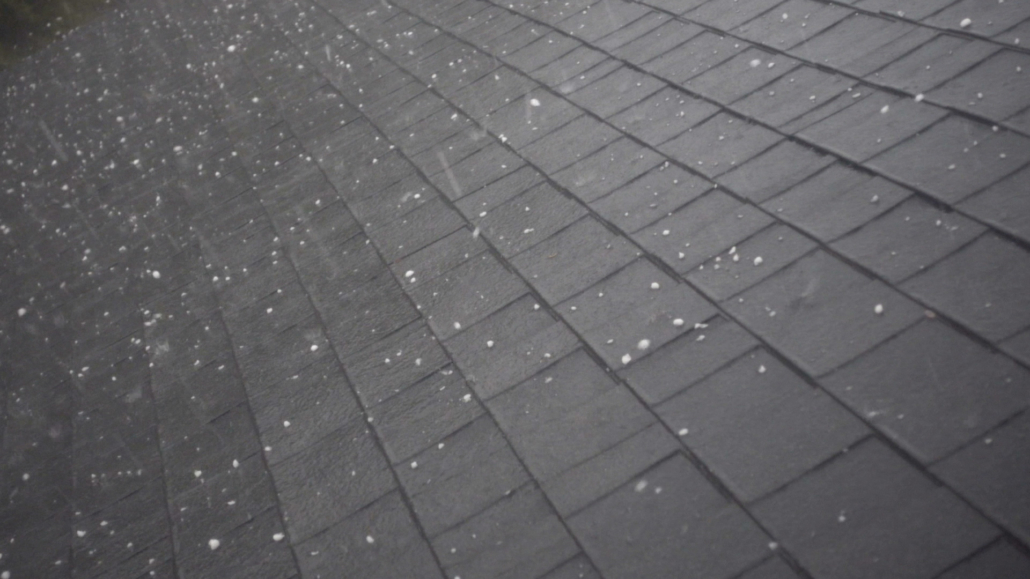 Can’t get enough info about hail? Neither can we! Here’s some more info. we found from the NOAA Severe Storms Laboratory.

Hail is a form of precipitation consisting of solid ice that forms inside thunderstorm updrafts. Hail can damage aircraft, homes and cars, and can be deadly to livestock and people.What we do: Read more about NSSL’s hail research here.

How does hail form?

Hailstones are formed when raindrops are carried upward by thunderstorm updrafts into extremely cold areas of the atmosphere and freeze. Hailstones then grow by colliding with liquid water drops that freeze onto the hailstone’s surface. If the water freezes instantaneously when colliding with the hailstone, cloudy ice will form as air bubbles will be trapped in the newly formed ice. However, if the water freezes slowly, the air bubbles can escape and the new ice will be clear. The hail falls when the thunderstorm’s updraft can no longer support the weight of the hailstone, which can occur if the stone becomes large enough or the updraft weakens.

Hailstones can have layers of clear and cloudy ice if the hailstone encounters different temperature and liquid water content conditions in the thunderstorm. The conditions experienced by the hailstone can change as it passes horizontally across or near an updraft. The layers, however, do not occur simply due to the hailstone going through up and down cycles inside a thunderstorm. The winds inside a thunderstorm aren’t simply up and down; horizontal winds exist from either a rotating updraft, like in supercell thunderstorms, or from the surrounding environment’s horizontal winds. Hailstones also do not grow from being lofted to the top of the thunderstorm. At very high altitudes, the air is cold enough (below -40°F) that all liquid water will have frozen into ice, and hailstones need liquid water to grow to an appreciable size.

How does hail fall to the ground?

Hail falls when it becomes heavy enough to overcome the strength of the thunderstorm updraft and is pulled toward the earth by gravity. Smaller hailstones can be blown away from the updraft by horizontal winds, so larger hail typically falls closer to the updraft than smaller hail. If the winds near the surface are strong enough, hail can fall at an angle or even nearly sideways! Wind-driven hail can tear up siding on houses, break windows and blow into houses, break side windows on cars, and cause severe injury and/or death to people and animals.

How fast does hail fall?

What areas have the most hail?

Although Florida has the most thunderstorms, Nebraska, Colorado, and Wyoming usually have the most hailstorms. The area where these three states meet – “hail alley” – averages seven to nine hail days per year. Other parts of the world that have damaging hailstorms include China, Russia, India and northern Italy.

WHAT YOU NEED TO KNOW ABOUT HAIL!

How To File A Homeowners Insurance Claim
Scroll to top